So, we have been getting several feedback from our customers that the tap water in their workplaces is dirty. Even after boiling, the water is still distinctly yellow in color. Thus, we decided to go down to one of their workplace (an industrial area) to conduct an experiment. We installed our Filtra Plus FWF 177 Tap Water Filter and ran the water consecutively for half an hour while filming the whole process. The video shown above is a fast-forwarded version of the whole process and you will be shocked to see what we discovered! 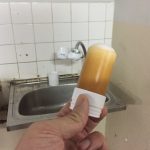 This is the result of just 30 minutes of consecutive running water! Nobody should be drinking water that is this dirty.

Here are some information you should know about toxins that may be present in drinking water:

Toxins That May Be Present In Drinking Water

Chlorine is commonly found in our drinking water and it is added for purification purposes knowing that it is not 100% safe. Chlorine is normally used for disinfecting swimming pools and cleaning products thus it is used for drinking water to disinfect it. The bad side is that chlorine is a reactive chemical and especially when interacting with water, it will produce poisonous hydrochloric acid. Some of the clear signs of side effects will be respiratory problems and also damaging the cells. In the long run, some effects will include impaired balance and a loss of memory.

Lead is toxic to majority of the organs and it responds badly to children very quickly. Lead can be consumed by drinking water especially and it stays with red blood cells as tests have proven from doctors. After which it will spread to the softer tissues like the lungs and liver. The severity of lead being absorbed into bones would remain there for decades. Especially for pregnant women, it will be poisonous to both the mother and her fetus. Relatable side effects from lead would be prostate cancer, reproductive problems for both male and female and autism.

Mercury is one of the most highly dangerous element as it can result to brain damage, cognitive disability, loss of memory, rashes on skin, temperamental behaviors, brain damage, blindness etc.

It is an inorganic, toxic metal that is also in our water. If too much consumption of Mercury, it will have a detrimental effect on us. This calls for a need to considering investing in a drinking water filter that eliminates mercury as well as other contaminants.

The exposure of Arsenic to people can be through drinking contaminated water and food preparation that involves contaminated water. The effects of Arsenic poisoning can cause abdominal pain, vomiting, lung cancer, bladder cancer and death for severe cases. Inorganic arsenic would naturally be present in drinking water. Hence, food that is prepared with this water and consumed would lead to chronic arsenic poisoning.

If you don’t know that our drinking water in Singapore had added fluoride. Back in the 1940’s, the process of adding fluoride to drinking water started to aid in reducing tooth decays. It may seem really helpful for the add on, but in actual fact fluoride actually is neurotoxin. The possible harmful effects involve the calcify the pineal gland and the thyroid gland which leads to unwanted invitations.

The possibility of prescription drugs entering our water supply is high when patients actually release traces in their urine or flushing down unused medication down the toilet or sink. These are the tiny amounts of pharmaceutical drugs which include mood stabilizers, hormone pills, antibiotics and other drugs that are being consumed. Kids, babies and toddlers are more vulnerable to environmental exposures as their bodies are still developing and these pharmaceutical drugs are putting them at risk.

Perchlorates can be found in water, soils and plants. It even makes its way up to the food chain and even more organically grown foods. Perchlorate that lingers in our environment is a health concern as it can disrupt the thyroid’s function to be producing hormones that are needed for normal growth and development especially for young infants, children etc.

Pathogens are micro-organisms and they can cause diseases. Pathogens consists of bacteria, protozoa and viruses. They are normally found and spread through drinking water and by channels like coming in direct contact with people who are sick, swimming in contaminated pools and contaminated food.

Monochloroethene is a gas that is colorless and produces a sweet odor. It is a significant industrial chemical mainly used to produce the “Polymerpolyvinyl chloride (PVC)”. It has a damage to the nervous system. It is highly flammable and toxic which are normally formed in the environment when soil like organisms dissect down chlorinated solvents. The production by industries of other chlorinated chemicals can then enter the air and drinking water supplies that could cause liver injuries.

Filtech’s water filters eliminate at least 95% of chlorine from tap water. A tiny investment in a small device could certainly go a long way. While this may sound like a sales pitch, the findings mentioned have been supported with scientific proof. Even if your filter is not going to be from us, every home should definitely be equipped with one. Besides, cooking with purified water also enhances the natural and true taste of your food dish! Get FILTECH’S WATER FILTERS with us today!

Happy drinking, and happy cooking. Most importantly, do them both safely!